Calcutta, (yes, that’s the name I prefer) was the hub of glittery nightlife from the 1940s till the 1970s, when the city would party all night long at Park Street, while most other cities would still be mostly unaware of the eclectic mix that good food and good music can be. But today, most of those places, which used to be the hotspots of those glorious yesteryears, like the Blue Fox or the Sky Room, have either closed down, or like the Trincas, have come to be only a shadow of what they were. 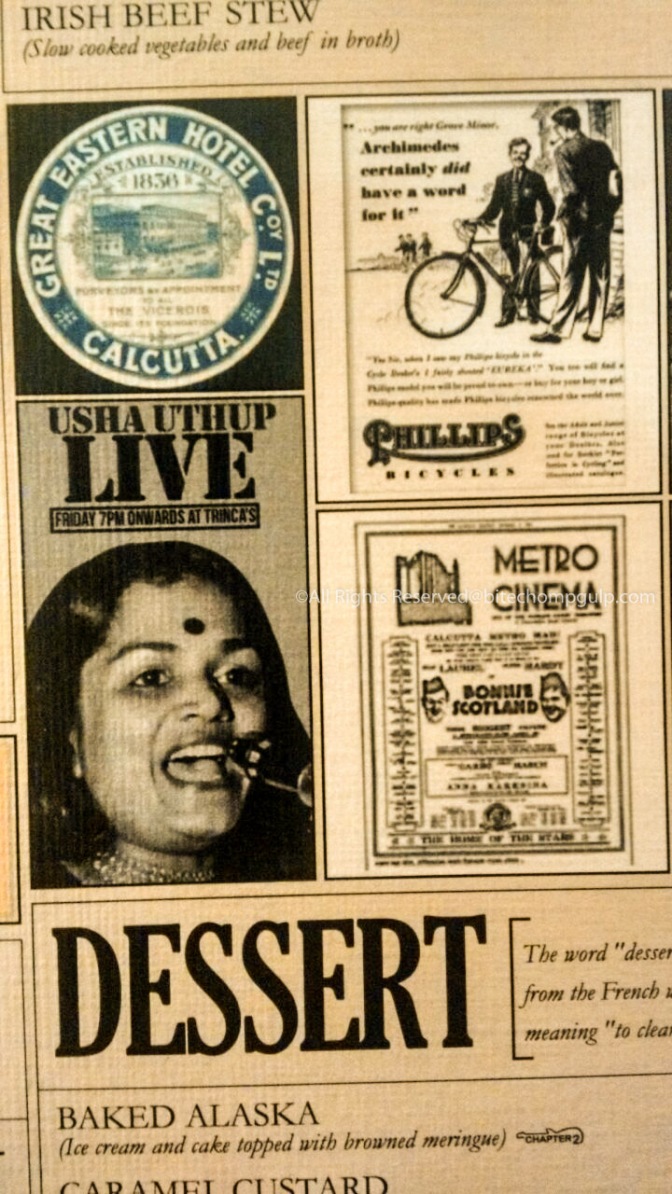 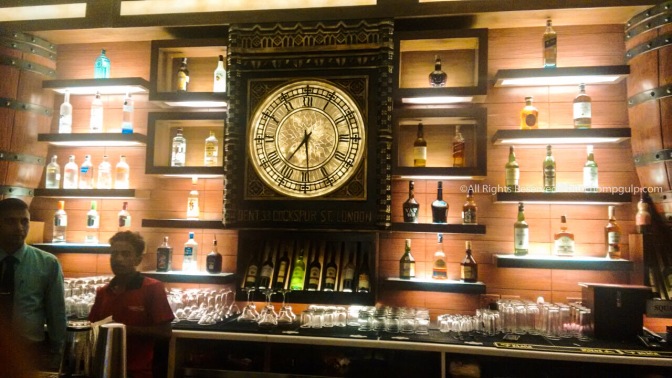 To quote Mr. Shiladitya Choudhury, Partner, “Chapter 2 is our effort to bring back the memories of food and music, which symbolized Park Street and Chowringhee between 1950s and 1970s.” Not many may know this, but the Choudhury brothers, Shiladitya and Debaditya, apart from being in the F&B segment, are musicians too. So they took upon this task to gift to the city, a place which would recreate not just the food, but also the live music culture that the city once boasted of.

When I visited the place for a session of food tasting, it was a pleasure to have Mr. Shiladitya with us all along. His funny anecdotes and in-depth knowledge about each and every dish, paved the way for a night of great food over some truly engaging and enlightening conversations.

Right from the entrance, one is sure to be transported to a whole new world (or old, should I say). Every single detail has been looked into minutely, to weave the feel of Retro Dining. Mr. Nitish Roy, National Award winning Art Director, has designed the place, and his master strokes are all too evident, at every corner of the place. The 3-D photo frames, the real-life displays, the Cadillac adorning the well-stocked bar, the menu and the table-tops featuring real newspaper clippings of historical value, all come together to exude the signature old world charm to the T. The Retro polka-dotted, double collared costumes for the team, designed by Ms. Agnimitra Paul, add to the feel even further.

The European techniques and textures forming the base, modulated by the Bengali touch of Calcutta, and further tweaked by the Oriya cooks, who were present in many households of those times, came to be known as the ‘Continental Cuisine’ and continues to be immensely popular even today. This Anglo-Indian styled food, coupled with feisty live music by stalwarts like Usha Uthup, made Calcutta a strong dining destination of the country. In fact, people from as far afield as Manchester and New York, made advance bookings at the famed city restaurants, lest they miss out on the experience. It’s good that today’s generation and hopefully the generations to come, won’t have to miss out on it as Chapter 2 has given the city a reason to smile and raise a toast.

Chapter 2 serves Anglo-Indian food, and seeks to reintroduce Live Music, by some of the oldest city bands. It is a 70 cover and also has a private dining area for hosting around 20 heads for a minimum cover charge.

Our meal started with two soups, both very elegantly plated in wide rimmed bowls. The Tomato Basil Soup was warm, hearty and comforting, but the Seafood Chowder was phenomenal. Given my love for seafood, it isn’t too difficult to bowl me over with a bowl of seafood of any kind. But this one was special. The seemingly tame bowl was a true powerhouse and the crustacean flavours were strong and bold enough, without being over-powering.

The Prawn on Toast was good, and who could go wrong with buttery toast topped with spicy, big prawns, anyway? The Chicken Liver Paté reminded me of the one I had at the legendary Koshy’s of Bangalore, and this one was no less on any quarter.

The next plate, of Devilled Crab, looked beautiful. The only bad thing about crabs is that sometimes it takes too much time and energy to crack the shell and scoop or suck out the tender meat. But this one thankfully, had the meat scooped out, cooked and then repacked into the shell again, and I just love this ‘eater-friendly’ format. The crab, which by its name and concept will definitely remind you of Mocambo’s dish of the same name, even after being a touch too salty, was one of the most interesting dishes of the meal.

The English Fish Fry were big, breaded fillets, with an amply crunchy exterior, a bite into which revealed the beautiful cooked fish inside. The other fish dish that we sampled was the Beckti Lemon Grilled, where not only was the fish cooked to perfection, but the sauce too smelled and tasted amazing. The Irish Lamb Stew was good, and like most old-school stews, had dices of vegetables with the meat. So every bite has a plethora of different tastes and textures to offer.

Then came my favourite part of the meal – the Pork Vindaloo. The chunks of fatty meat with the perfectly balanced sweet and salty caramelized gravy, is the food of my dreams, and Chapter 2 truly nailed this Goan curry brilliantly.

For desserts, there was Cheesecake, a no-frill, baked version of it. I love cheesecakes but I am very critical and choosy about them too. However, this slice did not give me any single reason to crib or criticize. It was the most wonderful way to end the beautiful meal that it was.

I would definitely recommend this place to all who love to combine good food with good music. And I wish Chapter 2, all the very best.

P.S. Check out their song request cards, they are pretty cool!

2 thoughts on “Chapter 2: A Bite into the Past”