There has been a sudden spurt of new Japanese restaurants in the city and I was curious about this one for a long time. Fuji is a place that surely surprised me, in a very pleasant way that is. The entrance is not very noticeable and hence, if you don’t know of it, there is a slim chance of you finding it by chance. 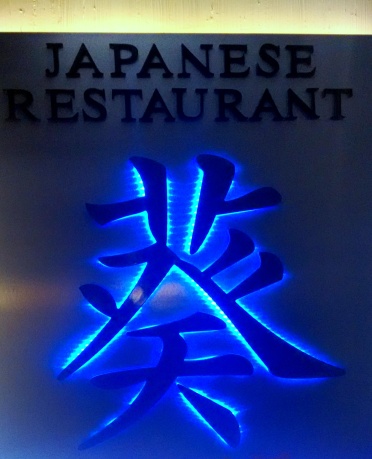 I ambiance was very soothing and the place is quite big, I mean it’s bigger than what I had assumed based on the pictures I had seen on Zomato, for sure. I love open kitchens and it was good to see the fresh raw materials, being handled so skillfully in their open kitchen.
We sat in one of those Japanese style seating tables, where one has to fold her legs. Here the seating area has a mix of conventional table-chairs and also low, Japanese style ones. The latter have been designed in such a way that one can either sit there like they do in usual benches or can fold his/her legs. 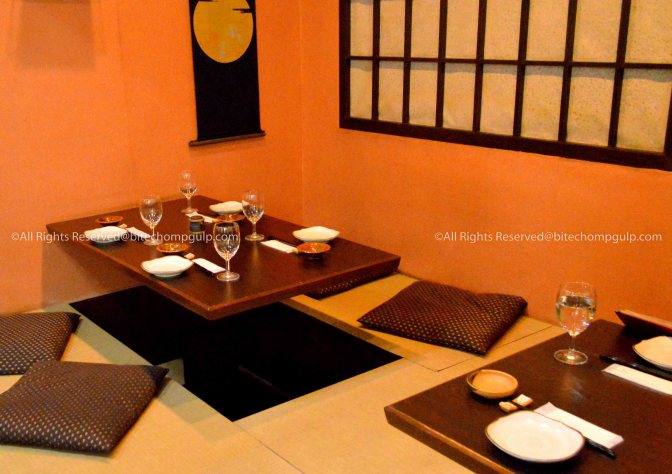 The Menu is something that definitely creates the first impression for me, and the one at Fuji was bright and catchy, with ample pictures to give the customers a good idea of what to expect. The golden tempuras, and the pink sashimis are sure to entice anyone who flips through the menu.

We were in a group of three and ordered the Sushi Platter, Maki Sushi, Prawn Tempura Bowl and Chicken Yakitori, some ice-teas and ice-creams.

The sushi platter was AMAZING, with makis, nigiris and californias. The one with ruby red roes on top looked particularly spectacular. It was a delight to put one sushi in my mouth after another, interspersed with the pickled ginger to cleanse the palate.

The Chicken Yakitori was pretty good too. The skewered chunks of chicken were glazed with a sticky miso sauce and provided a good contrast to the sushis. The Prawn Tempura Rice Bowl was BIG, on size as well as taste. There’s absolutely nothing not to love about a hearty bowl of sticky rice, topped with fluffy, golden tempuras, drizzled with soya. It came with a miso soup and pickles. The tempuras in themselves impressed me amply with its light, airy and crunchy exterior. And along with the prawns, there were vegetables too.
So till this point, I was very happy with the meal but the best was yet to come.

For desserts we ordered a Lemon Coconut Yogurt, the Sesame Ice Cream and the Wasabi Ice Cream. The yogurt was good with the tangy lemon balancing the sweet coconut, without either of the flavours being over-powering. But the yogurt was clearly overshadowed by the other two contestants. Both the ice-creams packed in an amazing punch of flavours and were completely drool-worthy. The sesame ice-cream had the nutty, Asian taste and I couldn’t help myself from going back for one spoonful after another of this one. However, my absolute favourite was the wasabi ice-cream. I love the sweet sting of the green paste, and whether in sushis, or in crackers and peanut coatings or in ice-creams, if there’s a hit of wasabi in there, I will give it a few extra points. The zesty hit of wasabi was followed by its sweet undertones in each spoonful, and I absolutely went bonkers over this baby. 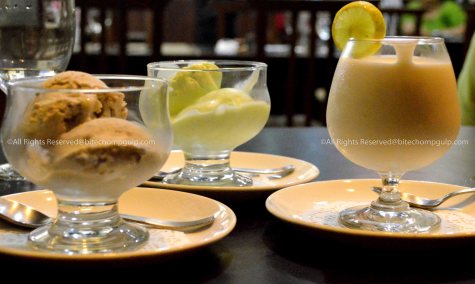 Well, the best part of this place was that it wasn’t too expensive too. Japanese is a cuisine which is surely taking our country by storm now, but sadly most of the places charge a bomb. If I have to pick out a flaw, that would be that the Apple Cinnamon Ice Tea was very ordinary. But I would overlook that any day and would love to visit this place again, and again.

2 thoughts on “Ticket to Fuji”